MAIN ADVANTAGES OF THE CONSTRUCTS

1. Possibility of testing patient’s viruses: Thus, combining amplification, digestion with restriction enzymes and fragment cloning we generate “chimeric viruses” carrying fragment(s) from one particular HIV-1 patient that confer its (their) phenotypic properties. For example, by replacing the envelope gene we can assess the viral tropism. 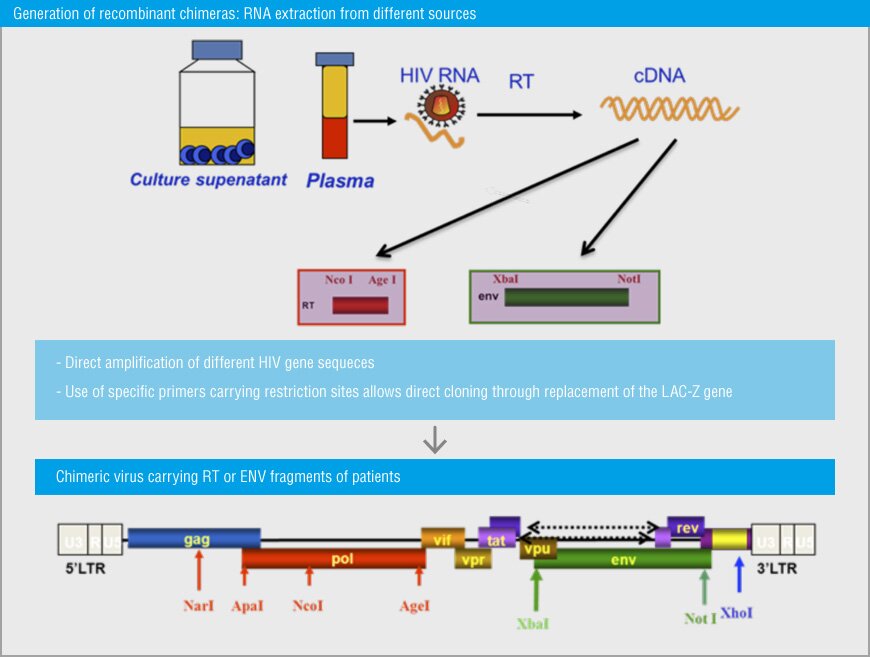 2. Detection system: The insertion of the renilla-luciferase gene in the position of nef gene allows tight monitoring of the replication, in a very efficient, sensitive, quick (24 h vs. 7 d) and cheap (10 times less) way. The second advantage is based on the fact that viruses produced from these constructs are fully competent and can perform several cycles of replication in vitro. This characteristic allows amplification of minority variants. For example, if we have a minor viral population displaying an X4 tropism, we can detect such variant after several cycles of infection.

3. Insertion of the Lac-Z gene represents a major advantage during the cloning process for the positive (chimeric viruses) and negative (wild type viruses) selection of clones.

4. Both viral populations and clones can be produced if we collect the whole product of bacterial transformation or we analyze separately bacteria colonies.

5. Viral production: Recombinant viruses are generated by transfection of cells. The chimeric viruses generated are able to infect both cell lines and natural cells such as lymphocytes, macrophages or dendritic cells.